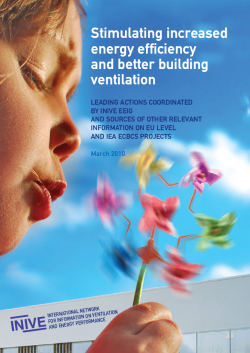 During the final phase of the ASIEPI project on Assessment and Improvement of the EPBD Impact, the idea of producing a book which presents the major findings from this project was launched. The proposal of producing this book received positive reactions from the members of INIVE EEIG (International Network for Information on Ventilation and Energy Performance) and was even strengthened by the suggestion of widening the scope and also including a presentation of the major outcomes of other projects in which INIVE EEIG and its members have acted or are acting as a coordinator or as key contributors. In the end, we even decided to include information on relevant projects or services related to energy efficiency in buildings from the European SAVE programmes, as well as from projects managed by the International Energy Agency Implementing Agreement on Energy Conservation in Buildings and Community systems (ECBCS). The book finally consists of 2 parts: